The Robinson Crusoe of Restoration Island 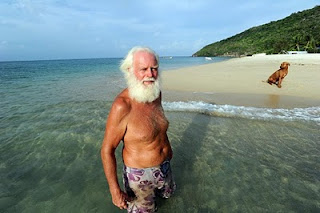 In 1980 the 50-year-old Gerald Kingsland placed an advertisement in the classified listings of “Time Out” Magazine.  "Writer seeks 'wife' for year on tropical island." Said the brief listing.
Kingsland was flooded with applicants, and from the 56 applicants, he chose the 26-year-old Lucy Irvine to be Girl Friday on his island. Lucy and Gerald spent a year alone together on the remote in the Torres Straits of . Lucy (and later Gerald) wrote a book about the experiences on the island, which became a huge international best seller, later to be turned into a movie starring Oliver Read and Amanda Donohue.  See http://www.lucyirvine.com/
Almost 30 years later another castaway is seeking a Girl Friday, except he is relying on the power of the internet to deliver love to his island. The island has been visited by several celebrities over the years, Russell Crowe spent a memorable night there on his honeymoon, to read that story CLICK HERE. To read more of the history of Restoration Island CLICK HERE


DAVID GLASHEEN
David Glasheen is a 65-year-old former businessman from ’s who traded in his suit for a loincloth after losing most of his money in the stock market crash of 1987. He first visited Restoration Island in 1993, he acquired an interest in the island with his remaining money in 1994, and moved there permanently in 1997 with his girlfriend. But with no hot water, a bath or the mod cons she found it tough and left to return to the city. Since then he has upgraded accommodation on the island, and has lived there happily with his dog Quasi and sporadic visits from Woofers, those from Willing Workers on Organic Farms (WWOOF).
Apart from looking for a Girl Friday to share his island Paradise, Dave also hopes to find a joint venture partner to develop the island in an ecologically sensitive manner. He envisions a marine research station, and a boutique eco-resort. With the Great Barrier Reef and (the biggest sea turtle nesting sites in the world)  and the Lockhardt River Aboriginal Community right on the doorstep, the island is uniquely placed to support such a project. To see more details of that CLICK HERE
David’s Search For Love
In early 2007 I contacted David Glasheen who lives on because I had seen an article about the island, and being an islomaniac wanted to know more about the man who lived on such a famous island.
Dave and I got on very well, sharing a common passion of course and over time spoke more and more. We met in person occasionally when he came down to town, and during one of these meetings we discussed how we wanted to find a Girl Friday to share his life, and the island.
Dave’s first foray into internet dating started with the help Roni Eyal, a young lady from Israel who came to the island as a Woofer (willing Workers on Organic Farms), on the 19th November 2004.
“She hounded me to join a dating site” said Dave. “She told me ‘It is the new way in the world now, if you really want to meet someone special.”
“Unfortunately women don’t come out of ocean, as easily as the internet.” Said Dave wistfully.
“She helped me create my profile on RSVP.” RSVP is the Australian dating site http://www.rsvp.com.au/
I told Dave at the time that unless he got some publicity about himself and capitalised on the fact that he was a real-life Robinson Crusoe, and made public the island it would be difficult to attract women. I told him the story of Lucy Irvine and the fame she had achieved, and told Dave she should capitalise on this. However, he was reticent about losing his anonymity at that stage and so we didn’t discuss it for a year or so.
Dave would contact me out of the blue from time to time, and eventually he changed his mind, and on the 9th of June, 2008 I wrote a post in my website featuring David’s search for a Girl Friday. The post didn’t attract much attention because at that stage David didn’t want too much publicity. He is a hermit after all, and didn’t want his island identified, and the RSVP profile only used his username Kato9. So although he had put his toes a bit deeper in the waters of the internet, his real name and location still weren’t public.

To see Dave's RSVP profile CLICK HERE
Dave’s First Taste of Publicity
In late December 2008 I was called by Katrina Creer, a journalist from The Sunday Telegraph in . She wanted to feature someone who had made a ‘sea-change’ to Port Douglas. I suggested instead that David was a better story but she decided at first it didn’t really fit with what she had planned. Then a week later she called me back and was very excited because she had only glanced at what I sent here and didn’t realise that Dave was looking for a lady. She loved the idea of a story of a modern-day, real life Robinson Crusoe looking for love over the internet. So she rang Dave back and asked him a bit more about this story.
“She asked me if I had any responses to the RSVP page, and I said very little” said Dave.
“Katrina said you’re already out there on the airwaves, this will just give you some more exposure. And so I agreed to do the story” said Dave.
Katrina’s article featuring David and his search for a Girl Friday was published in the Sunday Telegraph on December 28, 2008. Katrina’s article was picked up by media around the world, and David was featured on the Today Show in , The Times of London, USA Today and Several other TV shows from around the world will be featuring David as well, including a major German TV show.
Dave was featured on Current Affair, Channel Nine Australia, on Monday January 5th 2009.
THE INTERVIEW
With all the publicity Dave’s search for love is getting I thought it best to interview Dave and ask pertinent questions other journalists will want to know. This article is based upon many hours of phone conversations with David Glasheen, and all facts have been confirmed by the participants.
Q: Why did you decide to live on the island?
A: As a child I grew up on the ocean, and always dreamed of living on an island.
Q: What is the best thing about living on an island?
A: Complete privacy and tranquillity.
Q: What is the worst thing about living on an island?
A: Not having someone special to share the experiences with.
Q: Does it bother you to be called a hermit?
A: I suppose I am a hermit, just because I live here on my own. But that’s doesn’t make me unsociable. I see myself as a social hermit, and I’ve played host to all sorts of interesting people from all over the world here. I’m not a hermit by choice, and would really love to find the ideal lady to share the island with.
Q: Don’t you miss all the mod cons of living in a city?
A: No
Q: If you could have a dinner party with three famous people from any time in history who it they be, and why?
A: The Dalai Lama, because he represents spirituality, peace, tolerance and love for all people. Obama, because he represents hope and leadership; which we badly need. Osama Bin Laden because is the figurehead of aggression and intolerance.
Q: What would you do if you ruled the world?
A: I would try to bring about peace, love and tolerance.
Q: Tell me about your proudest achievement?
A: To be able to experience a little bit of heaven on earth on my own island. I’m the luckiest bloke in the world to live here, and money is immaterial. I am contented and happy, and in the modern-day world that’s a precious thing.
Q: The most recent book and movie have you enjoyed?
A: Shantaram by Gregory David Roberts. Ice Age III, I see primarily kids movies with my son.
Q: What one thing would improve your life?
A: A woman to share my special times with
Q: Who would play you in the movie of your life?
A: Anthony Hopkins, or if he wasn’t available Russell Crowe.
Q: Where do you see yourself in 10 years?
A: Becoming more involved and connected with the people of Cape York, and my friends and family.
Q: What three words would best describe the type of woman you are looking for?
A: Intelligent, feminine and adventurous
Q: Dave, are you worried about giving up your privacy to gain publicity so you can find love?
A: In the short term yes, but I think it all be worthwhile if I find a special lady.
Posted by David Glasheen at 11:19 PM