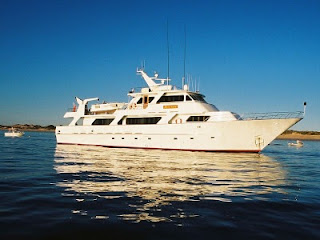 Image: The M.V. Mustique which Russell Crowe and his wife Danielle visited during a honeymoon trip on 19th April, 2003.
Russell Crowe and his wife Danielle came to while on their honeymoon in 2003. They were travelling up the on an 11 day trip aboard the 110 foot cruiser M.V. Mustique. They stopped at Snapper, Lizard, Morris and Forbes islands, the , at the tip of Cape York Peninsula finishing at , where the couple attended the Anzac Day dawn service on April 25th.
Crowe had just finished shooting Peter Weir’s “Master and Commander” which he played the role of 18th century Captain Jack Aubrey. He is known for getting into character and did extensive research for his role. So it’s not surprising that he would have wanted to stop at Restoration because of its association with the Mutiny on the Bounty. The Captain of the Mustique was formerly the Master of “The Bounty” replica in , who met his partner Irene on the boat in 1994-5 when she was the Quartermaster/Hostess. This was the replica created for the 1984 Dino De Laurentis film “The Bounty” starring Mel Gibson and Anthony Hopkins.
On the evening of Saturday the 19th of April, 2003 the super yacht anchored in front of the beach at . The Captain and his partner Irene came over the island and introduced themselves to David Glasheen, the only inhabitant of the island.  Dave is currently seeking a Girl Friday to share his island, to see more Click Here
“Hi, I’m David and this is my girlfriend Irene. We have some guests on our ship, can we bring them over for dinner?” asked the Captain.
“You’ve left it a bit late. I don’t have any cold beer, or fresh fish” said Dave.
“Don’t worry. We have a boat full, we will cook for you.” replied the Captain.
"Great! I will get the fire organised” Said Dave.
A short while later the tender for the yacht came over with the Captain, his wife Irene and Russell and Danielle Crowe.
“They were introduced to me simply as Russell and Danielle Crowe who were on their honeymoon.” said Dave. “And it was obvious that they were very much in love.”
While dinner was being prepared they all sat down in front of a fire on the beach. It was a lovely clear night, they all sat on the beach looking at the sunset in the west and watching the stars appear in the crystal-clear skies.
While they were all getting to know one another before dinner Dave asked “I apologise for asking, but I’ve heard your name somewhere before. Are you a tennis player or a golfer?”
Crowe laughed and stated “I’m not much good at either!” but didn’t really tell Dave who he was.
It was only during the course of the dinner that Dave caught references to the movie industry, and he still thought at this stage that Crowe might have just been a movie executive.
After dinner Danielle was keen to finish a book she had been reading, so went back to the yacht with the crew leaving Dave and Crowe alone on the beach. They relaxed and shared a couple of bottles of Bowen Estate red, which was the first bottle of wine Dave had drunk in six months.
“We yarned (told stories) for hours, we talked about my plans for the island, building a marine research centre and small eco-resort, and we discussed the Lockhardt River aboriginal community, the great success of their arts centre, and the exciting future of Cape York and the Torres Straits.”
“He was just an intelligent, unassuming down-to-earth kind of bloke” said Dave.
Crowe was now besotted with Dave’s tranquil and simple life. He explained to Dave that he craved privacy and the island would be an ideal getaway for him. “We discussed how he could get here without being noticed.” Dave now understood that Crowe must have been a celebrity.
“I’d be interested in building a donga (hut) on the island” said Crowe.
Although Dave thought Crowe was a “nice bloke” he didn’t really know him well enough to agree immediately.
“I don’t really know you that well mate” replied Dave “When people live together on an island the chemistry has to be just right.”
Although Dave is looking for a partner to help develop the island (he envisions a marine research centre/eco-resort). He didn’t really say yes or no, he just wanted time to get to know Crowe better, so Crowe accepted this gracefully.
He then asked Dave is he could take a photograph with him. David politely declined stating "My daughters would love to have a photo of you and me together, but isn't that what you came here to escape?"
Crowe smiled and admitted ruefully that Dave was right.
“He asked for my email address, and said that he would and get in contact with me when he had the time.” said Dave.
Dave sent a painting to Crowe, and invited him to his 60th Birthday in August 2003 in , but Crowe said that he was going to be really busy and probably unable to attend.
Crowe titled his first single "I Want to Be Like Marlon Brando", but later admitted that he had never even seen a Brando movie when he wrote and recorded the song.
Prior to their wedding, the couple made clear "their intention to get pregnant as soon as possible" after their wedding. Crowe’s first child with Danielle, a boy named Charles Spencer Crowe, born in on 21 December 2003, exactly eight months and three days after the night in question. In an interview Crowe stated that the birth of his first child was due to an ‘aquatic conception.”
If history is anything to go by, expect Crowe to be the next to reprise the role of Fletcher Christian, and possibly buy his own island.
This article is based upon many hours of phone conversations with David Glasheen, and all facts have been confirmed by the participants.
Posted by David Glasheen at 11:21 PM